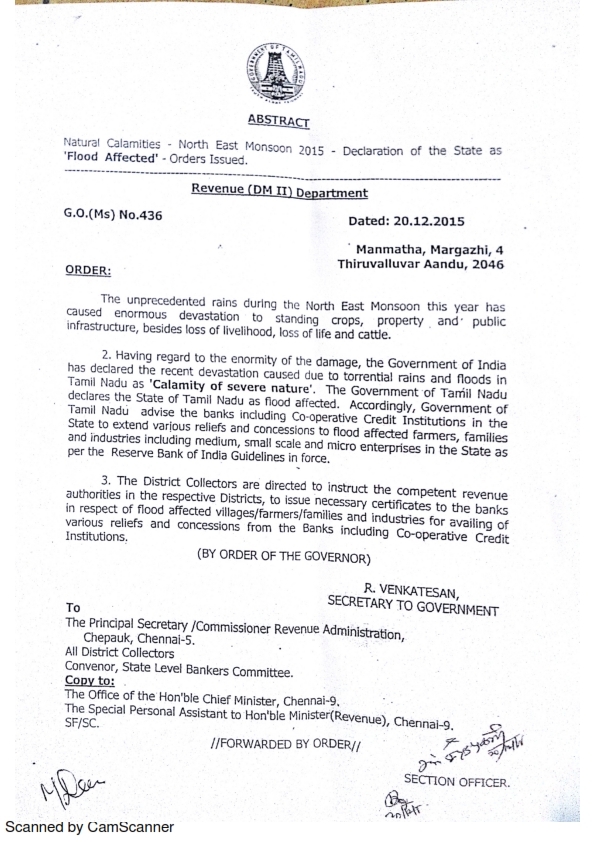 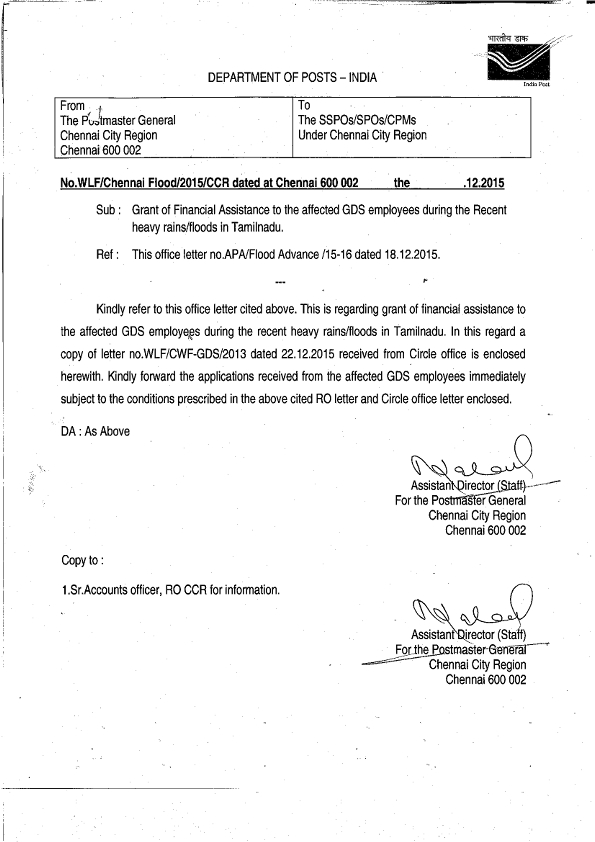 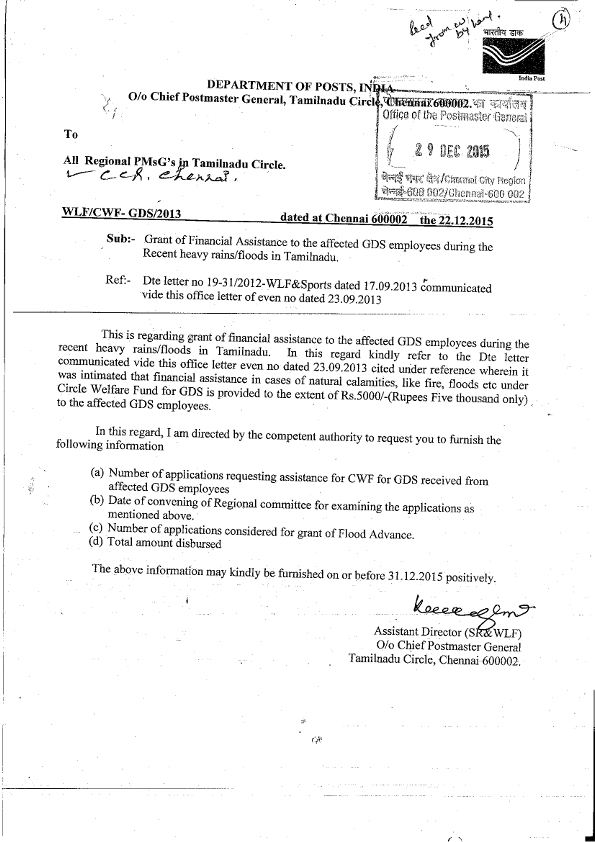 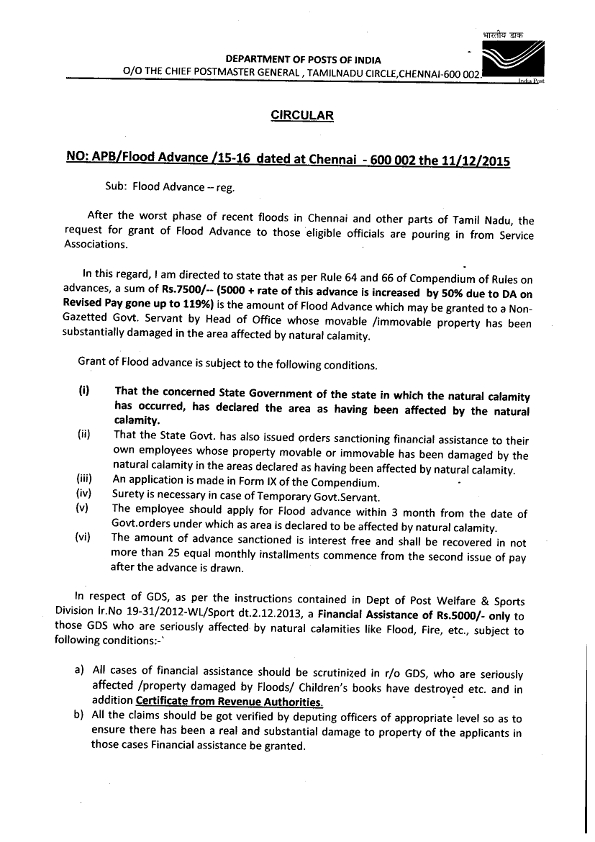 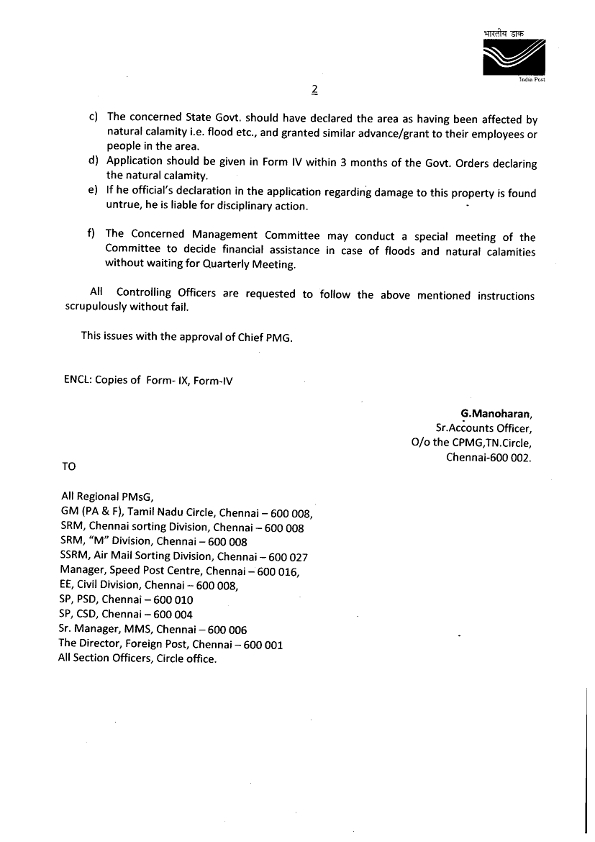 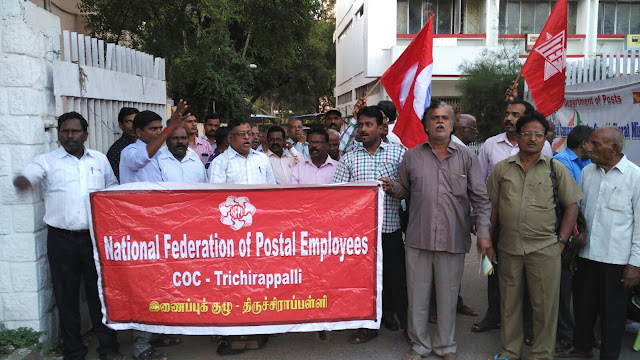 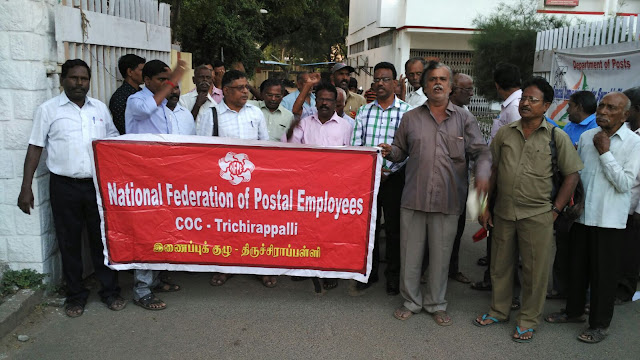 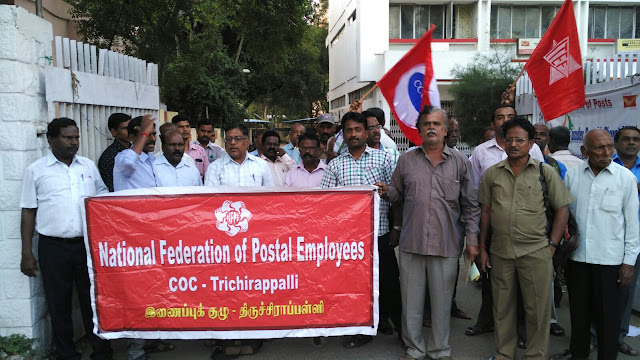 1. No Interviews in Group C Jobs from Jan 2016 - Skill Test will Continue

3. Departments Prepare their Comments on the Pay Commission Report for submission to the Implementation Committee.

4. Unions have requested for a copy of the Comments and Suggestions of the Department submitted to the Implementation Committee

7. Pay scales likely to change after fixing the Minimum Entry Pay Scale. Sources say that the Government is to enhance the Minimum Scale to Rs 20000/- against the Union demand for 26000/-

8. The Multiplication Factor may be enhanced to 2.87 in total for all the scales.

10.  Only 12% reservations are found for OBC against mandal Commission recommendation of 27%

11. Grant of MACP on court decisions applies only to the Specific Officials of the case.. Dopt Clarification.

12. Cadre restructuring of Group C is being processed Vigorously - Directorate. . All clarifications have been answered to the Finance Department queries.  The proposal is expected to be approved soon and implemented before the implementation of new Pay scales..

13. Central Government Employees Confederation are planning for a massive indefinite strike against the retrograde recommendations of the 7th Pay commission in March 2016..

14. Unions have called for Demonstrations against the 7th Pay commission recommendations at all Central Government offices in the country today the 30.12.2015....
Posted by srirangamanjal at 10:47:00 pm No comments:

68 years have passed after independence of India. But the need based minimum wage still appears a dream for working class. After reaching a tripartite agreement in 15th Indian Labour Conference in 1957 a scientific formula called as Dr. Akroid formula based on minimum needs of a workers to survive and work, was accepted. Based on this formula all Central trade unions and independent federations are struggling since long to achieve the demand of minimum wage.

This time also National council JCM demanded Rs. 26000 as minimum wage to a lowest class employees based on Dr. Akroid formula as on 01.01.2014 taking the commodity prices as Rs. 11344. The rates were taken as an average price of actual market from various cities throughout the India and actual receipts obtained from the shops and consumer stores were also produced as evidence. After adding component of housing, children education and social obligations it comes to 26000.

But the pay commission has recommended Rs. 18000 as minimum wage taking 12 monthly average of commodity prices quoted by Labour bureau Shimla which is totally contrary to Dr. Akroid Formula and the figures are imaginary not realistic.
The pay commission has also reduced the component of expenses on social obligation and children education as 15% contrary to the Supreme Court judgment of 25% on the plea that the employees are paid children Education allowance separately. The Children Education allowance is not fully reimbursed and expenses on education have increased heavily after liberalization of the education sector. The housing component has also been reduce by the pay commission stating that employees are paid HRA separately. House Rent Allowance is not full compensation of expenditure incurred on rent of accommodation obtained by an employee Earlier 3rd Pay commission has given 7.5% as the factor for housing.

Thus this 7th CPC has drastically cut the minimum wage.

The website of Agriculture Ministry also maintains the record of prices of commodities which are required to compute the minimum wage. Though these prices also vary from the real retail market. But if these prices had been taken by the pay commission as an all India average of the prices as on 01.07.2015. It will work out Rs. 10810. Thus the computation of minimum wage will arrive as Rs. 19880. After adding 25% for arriving at MTS scale it will come as Rs. 24850 and to convert it as on 01.01.2016 after adding 3% as suggested by 7th CPC. The final computation will come as 25596 when rounded off it shall be Rs. 26000/-

Without modification of minimum wage, no improvement is expected in the higher pay scales. Therefore it requires recomputation and revision. If it is revised consequently the fitment formula, multiplication factor and pay matrix will have to be revised.
Thus it is the urgent need to revise the minimum wage.

The NJCA, Confederation and NFPE have given charter of demands to the Government of India seeking modification in so many demands failing which all Central Government Employees will be compelled to go on indefinite strike from 1st week of March-16.

NFPE call upon the entirely of Postal, RMS and GDS employees to act as per the agitational programme given by the Confederation and NFPE and make the Government ready to accept the genuine demands of Central Government Employees
Posted by srirangamanjal at 11:37:00 pm No comments:

Wishing you a Merry Christmas 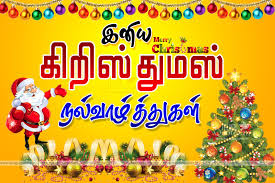 Posted by srirangamanjal at 8:35:00 pm No comments:

Posted by srirangamanjal at 8:24:00 pm No comments: 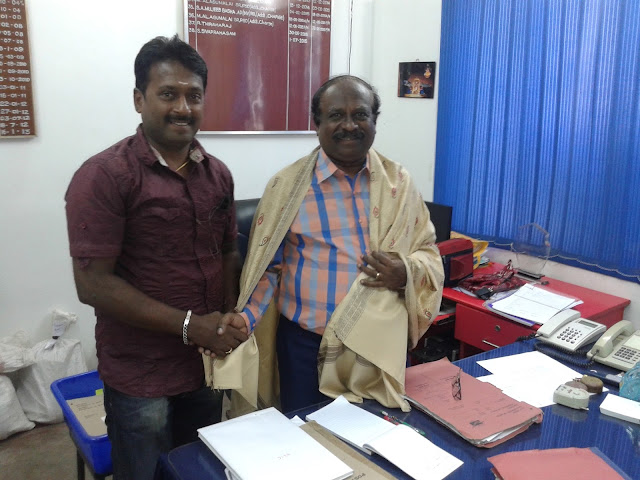 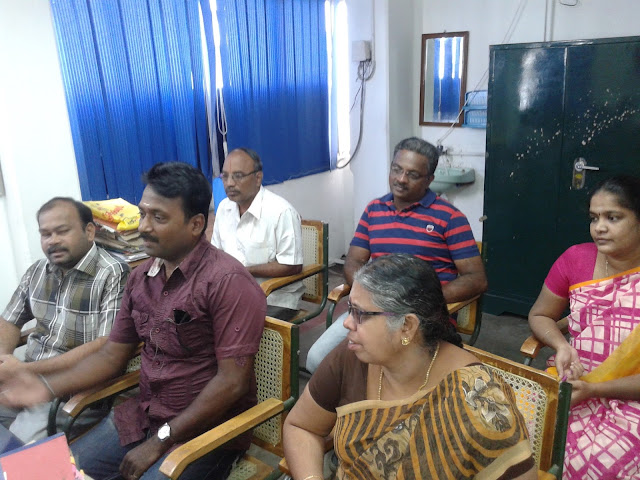 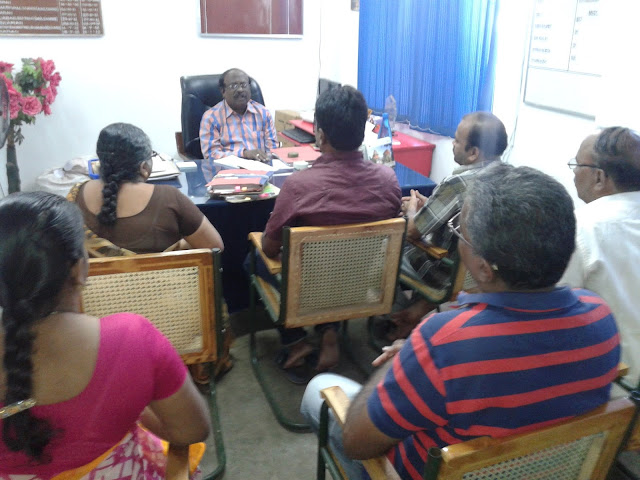 NFPE, Srirangam
Posted by srirangamanjal at 8:19:00 pm No comments:

Ammamandapam SO migrated to Finacle on 18.12.2015 - Inauguration photos 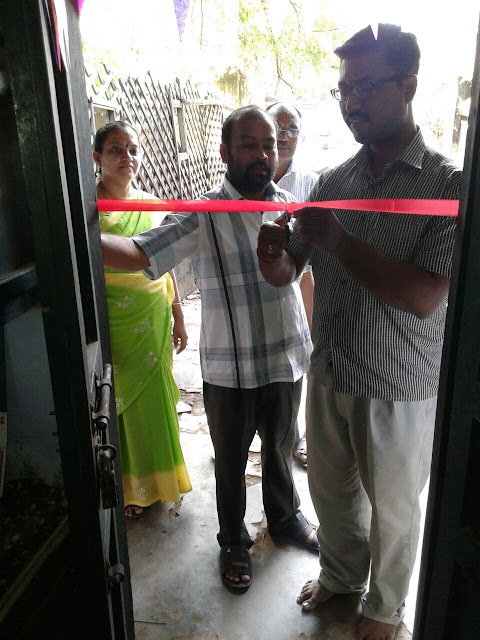 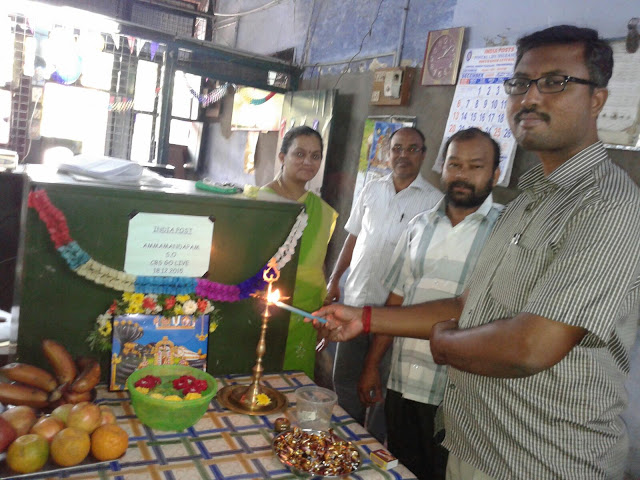 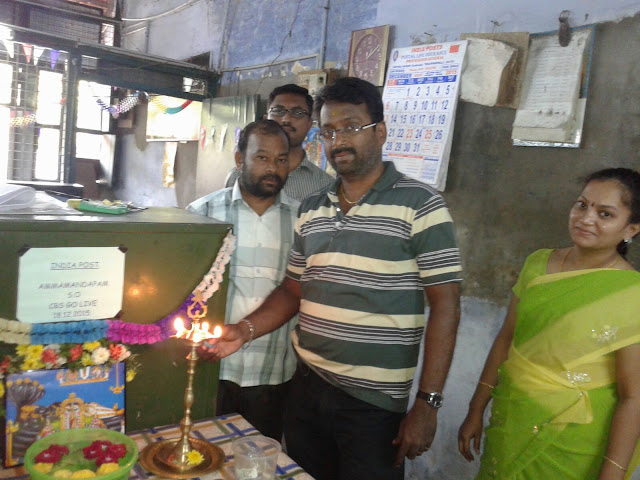 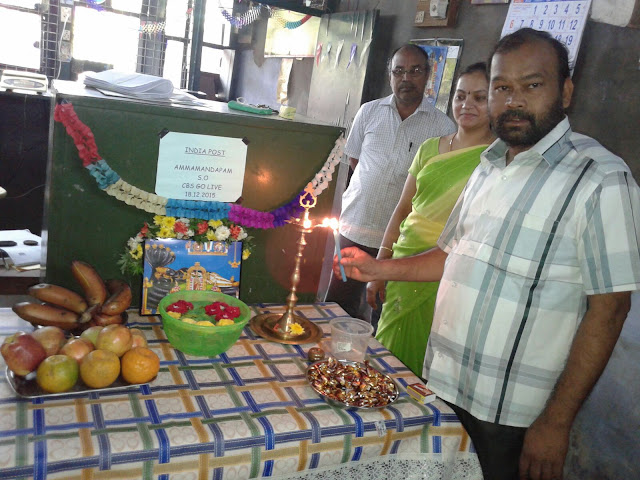 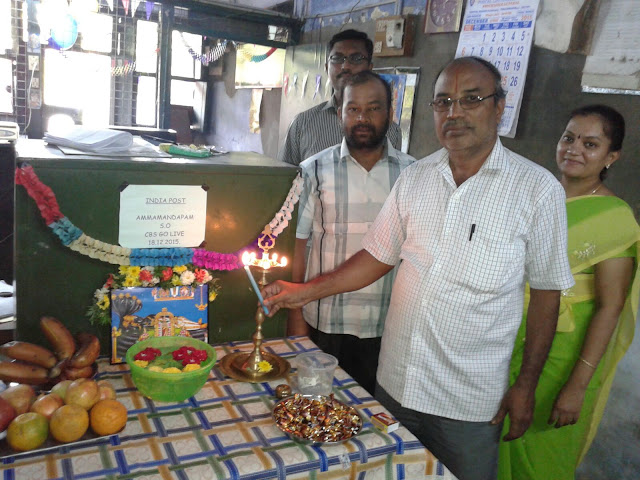 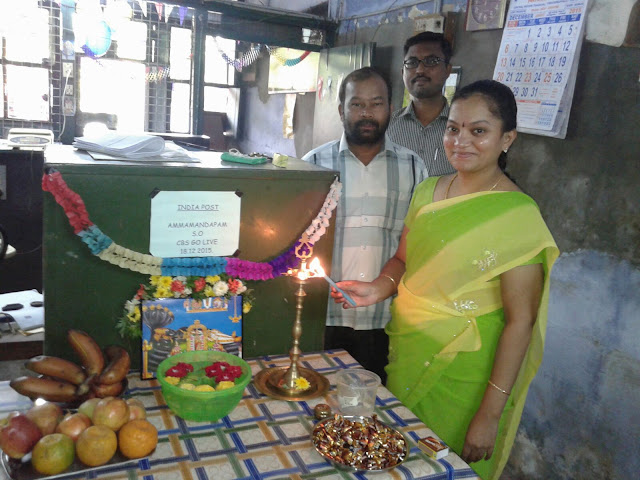 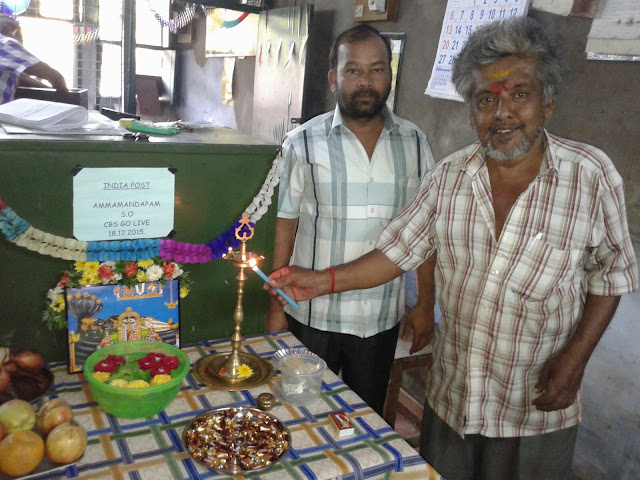 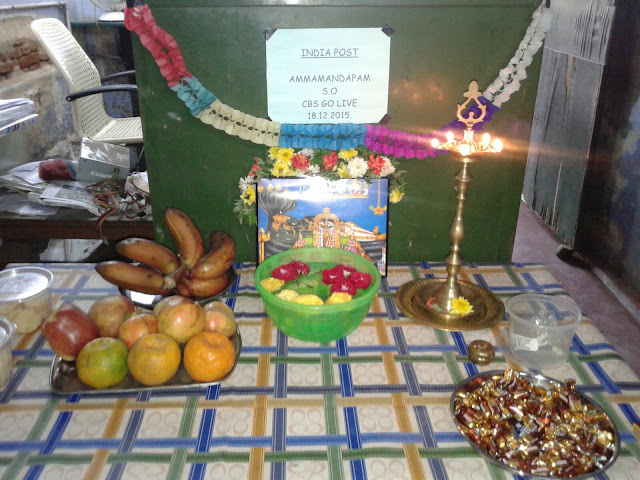 Posted by srirangamanjal at 5:30:00 pm No comments:

UNIONS TO CONDUCT STRIKE BALLOT BY THE 2ND WEEK OF FEB, 2016 IN VIEW OF THE NJCA’S DECISION FOR AN “INDEFINITE STRIKE”

All the Constituent Organizations &
NJCA Members,
Dear Comrades,
I am confident, by this time you must have studied the 26-point Charter of Demands, submitted by the NJCA to the Cabinet Secretary on 10th December, 2015, circulated vide NJCA’s Circular No.NJCA/2015/7th CPC dated 11thDecember, 2015.
As per decision of the NJCA, the following programmes have to be successfully observed by all your affiliates all over the country.
In view of the NJCA’s decision for an “Indefinite Strike”, on the above cited 26-point Charter of Demands, commencing in the 1st week of March, it will be essential that, AIRF, NFIR, AIDEF, INDWF and Confederation of the Central Government employees should conduct strike ballot. It will be quite appropriate that strike ballot is taken by the 2nd week of February, 2016.
The NJCA will meet and decide about the date of issue of the Strike Notice and also about the date of commencement of the Indefinite Strike. In the meantime, all out efforts may be made to build up pressure on the government, so that a negotiated settlement can be reached on our demands.
I shall keep you informed about the further developments.
With fraternal greetings & best wishes for a Happy & Prosperous New Year!

Posted by srirangamanjal at 8:08:00 am No comments:

The minimum pension fixed for retired Central Government employees is Rs. 3,500/- per month with effect from 01.01.2006. For pensioners, including those retired from public sector corporations and other establishments, to whom the Employees’ Pension Scheme (EPS), 1995 framed under the Employees’ Provident Funds & Miscellaneous Provisions Act, 1952 applies, provision of a minimum pension of Rs. 1,000/- per month has made with effect from 01.09.2014.

The Sixth Central Pay Commission had recommended pension of Rs. 3,330/- per month in respect of employees retired from the Central Government. The minimum pension of Rs. 1,000/- per month under the EPS, 1995 implemented by the Central Government was one of the recommendations of the Expert Committee constituted by the Government. Apart from this, the Committee on Petitions of the Rajya Sabha under the chairmanship of Shri Bhagat Singh Koshiyari in its 147th Report had recommended to increase Government share of contribution under EPS, 1995 from 1.16 per cent to 8.33 per cent to support the minimum pension level of Rs. 3000/- per month. However, it was not found feasible for implementation.

However, representations, grievances and complaints have been received from various quarters that the monthly pension to pensioners under EPS, 1995 have not increased to Rs. 1,000/- per month even after the notification in respect of pensioners who had taken short service pension, commutations or return of capital. Some grievances also relate to the fact that pension has not increased for those drawing more than Rs. 1,000/- per month.

This information was given by Shri Bandaru Dattatreya, Minister of State (IC) for Ministry Labour and Employment, in reply to a question in Lok Sabha.
Source: PIB News
Posted by srirangamanjal at 8:05:00 am No comments:

It  has been intimated by Postal Directorate that the concerned stake holders are actively working to complete the ATM installation process as per the DoP schedule but most of the ATM locations are not aware of the instructions relating to ATM implementation process and interim cash management process. Some of the locations are not providing the ATM fit currency notes to the AGS vendor for loading into the ATM machines for enabling the cash live. This is resulting in undue delay in completion of the ATMs rollout.

To make the all concerned aware of the ATM Implementation process, Directorate has ordered to   circulate the hand book  to all the P.Os where ATM are going to be installed.

PL CLICK HERE TO VIEW
Posted by srirangamanjal at 2:21:00 pm No comments:

LIST OF HOLIDAYS FOR THE YEAR 2016 AND LIST OF RESTRICTED HOLIDAYS FOR ALL CENTRAL GOVT. OFFICES IN TAMILNADU 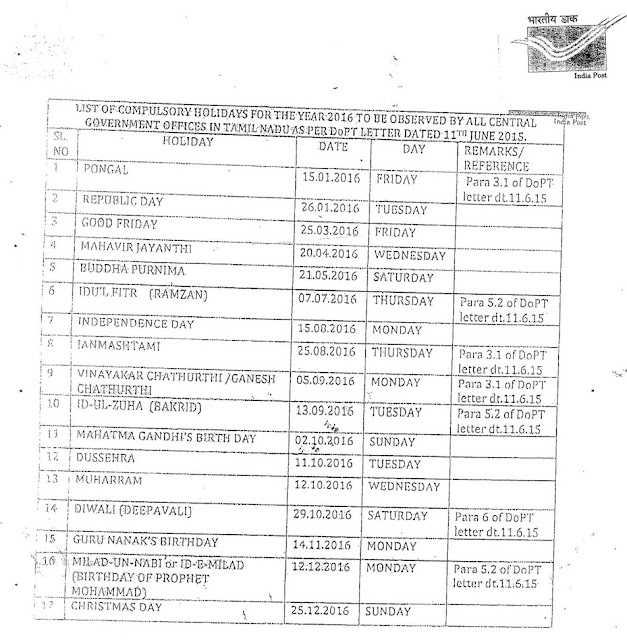 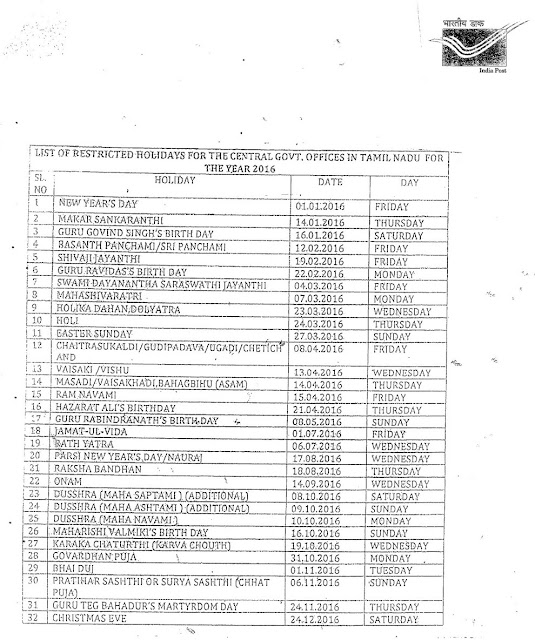 Posted by srirangamanjal at 6:55:00 pm No comments:

Rules regarding quoting of PAN for specified transactions amended
The Government is committed to curbing the circulation of black money and widening of tax base. To collect information of certain types of transactions from third parties in a non-intrusive manner, the Income-tax Rules require quoting of Permanent Account Number (PAN) where the transactions exceed a specified limit. Persons who do not hold PAN are required to fill a form and furnish any one of the specified documents to establish their identity.
One of the recommendations of the Special Investigation Team (SIT) on Black Money was that quoting of PAN should be made mandatory for all sales and purchases of goods and services where the payment exceeds Rs.1 lakh. Accepting this recommendation, the Finance Minister made an announcement to this effect in his Budget Speech. The Government has since received numerous representations from various quarters regarding the burden of compliance this proposal would entail. Considering the representations, it has been decided that quoting of PAN will be required for transactions of an amount exceeding Rs.2 lakh regardless of the mode of payment.
To bring a balance between burden of compliance on legitimate transactions and the need to capture information relating to transactions of higher value, the Government has also enhanced the monetary limits of certain transactions which require quoting of PAN. The monetary limits have now been raised to Rs. 10 lakh from Rs. 5 lakh for sale or purchase of immovable property, to Rs.50,000 from Rs. 25,000 in the case of hotel or restaurant bills paid at any one time, and to Rs. 1 lakh from Rs. 50,000 for purchase or sale of shares of an unlisted company. In keeping with the Government’s thrust on financial inclusion, opening of a no-frills bank account such as a Jan Dhan Account will not require PAN.  Other than that, the requirement of PAN applies to opening of all bank accounts including in co-operative banks.
The changes to the Rules will take effect from 1st January, 2016.
The above changes in the rules are expected to be useful in widening the tax net by non-intrusive methods. They are also expected to help in curbing black money and move towards a cashless economy.
A chart highlighting the key changes to Rule 114B of the Income-tax Act is attached.